In this episode of Game of Thrones, we learn that Sansa and Arya enjoy Ned cosplay, that Euron makes a compelling case, that the Iron Islands primary season is rough to say the least, that the children of the forest have some cold friends, that Jorah is under orders to cure himself, that Daario has no lines this week, that Tyrion and Varys want the support of the God of Tits and Wine...or at least just Tits...and that Hodor has always had one job.

In this episode of Game of Thrones we learn that Jon just wants to get warm, there Sansa has done nothing to forgive, that Brienne doesn't forgive and she doesn't forget, Tyrion is rich and doesn't own slaves, Grey Worm and Missandei don't trust the Masters, that Daario is aware that no matter what he does he's a dick, that Jorah knows his clock is ticking, that even a tiny Khaleesi has to make water, that Margery will most certainly NOT be doing the walk of atonement, that Theon is sorry for being sorry, that Tormund has a girlfriend and that it's not wise to threaten to rape fireproof white girls. 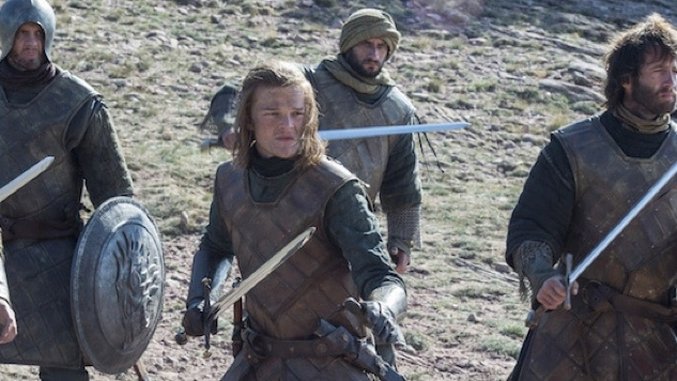 In this episode of Game of Thrones, we learn that Dany will always have Vaes Dolthrak, that Jon Snow knows nothing and he saw nothing, that the Artist Formerly Known As Stannis the Mannis was not the Prince to be, that "I did what I thought was right and I got murdered for it" are the new words of House Stark, that Ser Davos believes in failing fast and failing often, that when someone asks Jon Snow if he's a god, he doesn't say yes, that Tormund will bear hug a man with a half dozen stab wounds in his chest, that Dolorous Edd read Reddit (your eyes are still brown!), that one sword fight is enough for one day, that Dany's body double has impressive side-boob, that Tyrion is up for a game of Cards Against Westeros, that Qyburn has a child army, that Pycelle the Flatulent fears Silent Bob, that a girl can see, that Rickon has been growing like a weed and that the man who passes the sentence swings the sword...until his watch is ended.

In this episode of Game of Thrones, we learn that Lyanna rides a pale horse, that "I'll Ring Your Head Like A Bell" are the true words of House Stark, that Hodor Hodor Hodor Hodor, that Baelon is too old for the Bridge of Unusual Ricketiness, that Arya Stark is still a stick fightin' woman, that Davos has nothing to apologize for, that Wun Wun won one, son!, that Melisandre is absent minded about her ability to raise the dead (oh, yeah, I can totally do that!), that Roose Bolton is one trusting guy, and so is Walda, that babies make good doggie treats, that Tyrion has a way with dragons, that the High Sparrow has some low motives, that there's no moot like a King's moot that home...is where Theon wants to be..and that Jon Snow was only MOSTLY dead.